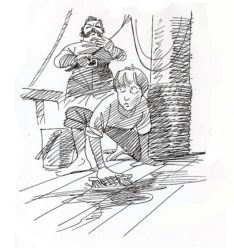 Dr Caroline Withall is a social and economic historian, primarily interested in 18th and 19th century child labour. Originally from Liverpool, she has also always had a strong interest in maritime history.

The Marine Society is perhaps best known for its pivotal role in supplying the Navy during manpower crises in the 18th century. Dr Caroline Withall‘s research highlights a lesser known aspect of the Society’s work, the recruitment of boys as apprentices to merchant ships, drawing attention to these forgotten boys Using the Society’s apprenticeship registers and correspondence books, data has been gathered on approximately 25,000 boys and analysed not only to to develop a missing piece of maritime history, but also to consider a number of important themes with wider significance to social and economic history. For example, the patronage of the East India Company; popular trade routes; the supply and demand of the sector; and ports the boys were sent to, both home and abroad. The registers are comprehensive in recording the boys’ background details, such as parental occupations; ages boys were sent to sea; previous occupations and age starting work; and the locations boys were recruited from, which provide a lens into the child and young adult labour market of the time.

The register data is brought to life by the Society’s treasure trove of correspondence, and together with contemporary newspaper reports, enables reflection on recent themes in social history. For example, the boys’ own agency in their placement; skills they learned both in training and once at sea; and their care and monitoring post placement. It is also a fantastic source to track social mobility and apprenticeship outcomes, as there are details of further employment at sea, shipwreck, absconsion, discharge, illness, injuries, and in some instances, a grisly end. Individual tales of tragedy and triumph reveal what life was truly like for the boys who rode the crest of the wave; from harrowing accounts, such as that of Edward Kelly, who was so badly beaten he almost lost the use of his arm, to success stories like George Byworth, who enjoyed a long career at sea with the East India Company after first being placed with them by the Society.

Caroline’s talk will be of particular interest to local residents, as over 50 boys from this area, including Richmond, Kew, Mortlake and Ham, were placed out to sea, and she will be including some of their stories.