Talk by Susanne Groom: The lost buildings of Kew 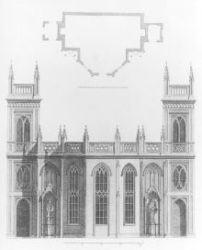 Susanne Groom takes us on a tour of the lost 18th century buildings and follies in Kew Gardens, considering why they may have been built and speculating on the effects they produced on those who viewed them.

The Royal Botanic Gardens at Kew is today a World Heritage site and probably the most famous and important botanic garden in the world. Its botanic origins date back to the 18th century, but less in evidence today is the large area of the gardens which provided a royal pleasure park of historic world architecture. Styles of garden buildings in this theme park ranged from newly discovered ancient ruins of the Middle East to those of classical Greece and Rome, from a Chinese temple to a Gothic cathedral, increasing in number and variety over three decades of the mid 18th century. Other stately gardens had idiosyncratic follies, but none to eclipse those at Kew.

Various indications of the lost Pleasure Gardens at Kew survive, notably the Orangery, the Temples of Aeolus, Bellona and Arethusa and, of course, the most famous, the Pagoda. Originally there were over 20 decorative buildings in the garden, mostly designed by William Chambers. They were, if you like, a Grand Tour to be made in an afternoon and made specifically for the one aristocratic person greatly interested in architecture and travel, who most wanted to go on a Grand Tour, and who, because of his position as heir to the throne, was unable to do so. This person was the Prince of Wales, later George III.

So, what did these buildings look like? Who masterminded them? What functions did they serve? Who paid for them? And what happened to them?

These are some of the questions that Susanne wil be addresing in her talk.

Susanne Groom lives in Kew and is a former curator at Historic Royal Palaces. She co-authored At the King’s Table: Royal Dining Through the Ages, which was the subject of her talk to us in December 2013, Discover the Gardens and Kew Palace: The Official Illustrated History. She gave a talk to us in October 2018 on the Hanoverian royal family’s 300 years at Richmond and Kew.

Susanne’s talk will be followed by our customary seasonal party, with wine, soft drinks and nibbles.