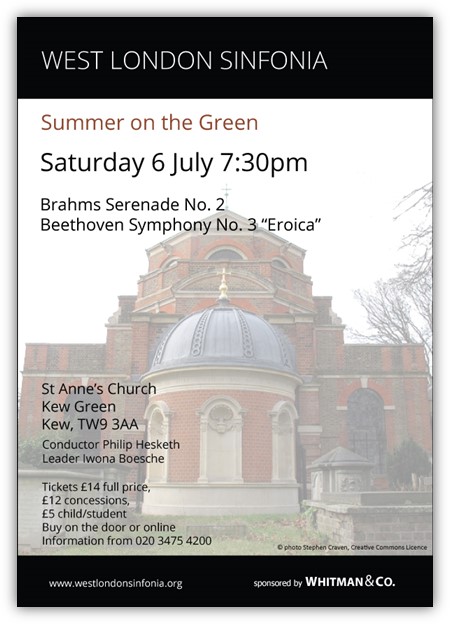 The West London Sinfonia (WLS) will be performing a concert titled ‘Summer on the Green’ on Saturday 6 July at St Anne’s Church, Kew at 7.30pm.

The July concert will feature two prominent works: Brahms Serenade No. 2 and Beethoven Symphony No 3. “Eroica”.

The Symphony No. 3 “Eroica” is a symphony in four movements by Ludwig van Beethoven. It is one of the composer’s most celebrated works, which was composed mainly in 1803–1804 and premiered in Vienna in 1805. It was grander and more dramatic than customary for symphonies at the time and was Beethoven’s largest solely instrumental work.

The second piece of music is Brahms Serenade No 2 which was written in 1859 and dedicated to Clara Schumann with the first public performance taking place in 1860. It is scored for a chamber orchestra, including double woodwinds but omitting violins, trumpets, trombones and percussion.

The conductor for this July concert will be Michael Robson-Kiernan taking place at St Anne’s Church on Kew Green.