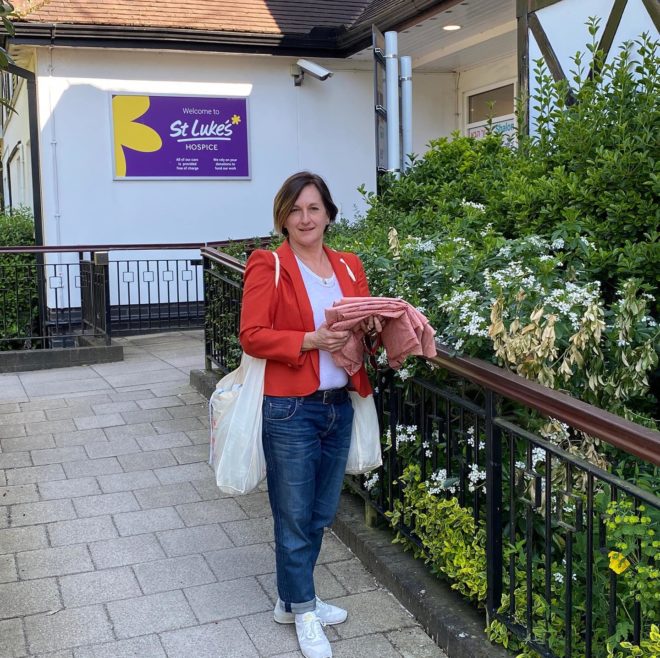 For the first time in 30 years of marriage I made my husband a ‘packed lunch’ for work. The previous day he had come home from hospital and felt a little weak. He remembered that he hadn’t eaten all day as the canteen queue was so long he didn’t have the time to wait. It wasn’t a symptom of coronavirus. Relief.

The following day he returned home very late after a 15 hour shift on the Covid wards, suitably fed from a home-cooked meal and although very tired, also very satisfied.

It has been 2 weeks since he had to redeploy the whole of his junior team from Haematology to General Medicine, which means that ‘business as usual’ on the cancer wards is down to him and a few other consultants. Like most doctors, they manage their workload as well as working shifts on the Covid wards. This is the only way that gives the staff who are permanently working on these wards an essential break from the virus infested atmosphere they work in.

In the days leading up to his first shift he was unusually anxious and admitted to being worried. I had never seen a reaction like this from him before and so naturally this had an effect on me and on our three adult children. The household was uneasy, the meal times at the dinner table dominated by talk of Covid 19.

We adopted a rule that after dinner we would play a board game. This lasted for only a few days. Our youngest child has always taken a very avid interest in her father’s work, even to this day. Since she became aware that her father helped sick people she has been asking ‘how was your day? Who did you see? Is ‘so and so’ better today? At 23 she is no different. Her older siblings are equally interested in their father’s work but happy to mix it up a bit and talk about fashion and politics instead. But those subjects have been put on a backburner…

I was unusually quiet and pensive in the few days running up to that Wednesday of his first shift – I didn’t want to listen or contribute to family conversation. I ate silently, cleared the plates and slipped away into the temporary office of our front room, with the excuse of answering work e mails. And so I was dreading his first day on the Covid wards and the inevitable discussion we would no doubt be having that evening. I had convinced myself that this was not going to be a happy mealtime.

The dog hears him first walking up the gravel path and then I hear his identifying jangling keys in the door. The call of “hello, I’m home” in a tone familiar to the one he had before this virus ever mutated.

‘How was your day’ my girls rush over to ask. ‘Really good, really really good’ he replies. He is no longer frightened, he has a new routine, he knows what he has to do, he is content knowing that he can contribute to his ‘duty of care’ in his own way.

So for now, he brings home his home made scrubs after his shift. I quickly run them through a boil wash and into the drier. The fear has melted away and a different routine has brought back some normality to our home life. And packed lunches aren’t part of it.

It has been nearly 5 weeks since Richard’s first COVID 19 shift. His team of consultants had volunteered to do shift work at his hospital to alleviate the pressure and the risk of infection for those doctors who were dealing with COVID -19 patients on a daily basis. Earlier that week, when we were all apprehensive about the coming weeks, Richard brought back home an old pair of tattered surgical scrubs. He handed them to our daughter, Magda, and asked her whether there was any way she could rally round her contacts in the world of fashion and address the problem of the lack of scrubs. Before I could even take a closer look at the garment in question, she had already found the newly established Facebook group ‘For the Love of Scrubs’ which was only a day old. She signed up as the coordinator for Hillingdon Hospital and the idea of making scrubs for the NHS became a reality – in just a few minutes! The main stumbling block to get this all off the ground, was to get hold of a simple and easy pattern. So I gave my good friend Louise Selby a call and asked her whether she could help. Within 24 hours Louise had taken the tattered scrubs apart, drawn up a pattern and returned with a perfectly sewn  pair which she had created from a blue bedsheet. Now these were scrubs to covet! Richard felt too guilty to wear them himself as his next shift was a few days off,  so he gave them to his consultant colleague who was simply over the moon. And so of course Louise whizzed up 3 more pairs for the rest of team.

The days which followed saw a huge rise in volunteers for Magda’s group. In the space of a week the group had grown to over 100 and ‘For the Love of Scrubs’ had by now over 4,000 members nationwide. Already the organisers were beginning to feel the stress of such a big initiative, especially the mobilisation of the thousands of offers of help. That was when I decided to look to our community in Kew and set up an independent group to produce scrubs on a small scale for local NHS workers and carers.

I asked my Pensford Ladies tennis group for donations of fabric. News spread speedily throughout the streets in Kew and bags and bags of bedding began arriving on my doorstep. Offers to sew came quickly and before I knew it I was coordinating a team of proficient dressmakers.

In the meantime I had asked  Linda Copland to create 4 different sizes from Louise’s master pattern. Magda and I  spent the next few days over our kitchen table, cutting out patterns and distributing them around her group in Harrow and Hillingdon, as well as to our small but efficient group which I named ‘Kew Sews Scrubs’.

Rose McGrath put me in touch with Fiona Ross Tatum, Chair of Trustees at Princess Alice Hospice. I was then contacted by the Head of In-Patient Services there with a plea to supply isolation gowns and scrubs for them as they were increasing their bed capacity to take in COVID-19 patients. Coincidentally, that same day,  the first thing Richard said to me as he walked through the door was that we ought to sew for hospices and care homes as hospitals were sending positive cases there and the staff had no protection at all.

And so our ‘small’ team started to sew, producing 12 sets of scrubs and 14 isolation gowns in 5 days! It was only on the day that I took these to Princess Alice Hospice that I realised what a significant impact even such a small group as ours was making in protecting the care workers who had absolutely nothing to wear under their PPE apart from their usual uniform to wear on the wards.

I signed up to scrubhub.org.uk, an organisation which was created to provide a way for the public to contact local hubs in their areas. I set up a  Facebook page so that the public could post messages and asked Rose to help me administrate the group. But I should have known what was coming from my experience with Magda’s group. On one morning alone I counted over 40 requests to help sew! Whole mornings were spent trying to reply to all the FB and e-mail requests.

I began to feel overwhelmed and stressed. I was working erratically in my day job and losing sense of time. The dining table was cluttered with pins, scissors and offcuts which I was just sweeping to one side to make room for the plates set out for irregular mealtimes. Our sacrosanct family time was taking second place. It soon became apparent that I needed to organise myself in such a way so as to be able to cope better and so I could actually meet the needs of the recipients rather than the many requests of volunteers coming to us from all over the borough and as far away as the Surrey borders.

Rose’s energy and enthusiasm brought about the expansion of the initiative. She began to filter the requests into ‘sub hubs’ and numerous WhatsApp groups, which have since developed into hubs of their own serving West Middlesex, Teddington Memorial and Kingston hospitals. Each sub hub has a lead and Rose co-ordinates these groups so that we can all work together and help fulfil the steady requests which come in daily.

I liaise with other hubs across London through Scrubhub, responding to requests from individuals and small groups. Kew are able to make up small quantities of ‘ blues’ for NHS workers and scrubs in various fabrics for hospices and care homes. But the need is great. Yesterday I had a request for a whole team of nursing staff at St Mary’s Hospital, Paddington who are desperate for scrubs – they need 40 sets. The lead nurse on this large COVID 19 ward wants  to show his staff a token of appreciation, to lift their morale by organising much needed scrubs for them.

Today I have mobilised our small workforce and  hopefully by next week there will be a very happy team, feeling better protected in their workplace, wearing scrubs made with humility and generosity by the wonderful sewing community in Kew.

We have delivered over 100 sets of scrubs and 62 isolation gowns and are presently working hard to provide St Mary’s Hospital in  Paddington with their much awaited scrubs.