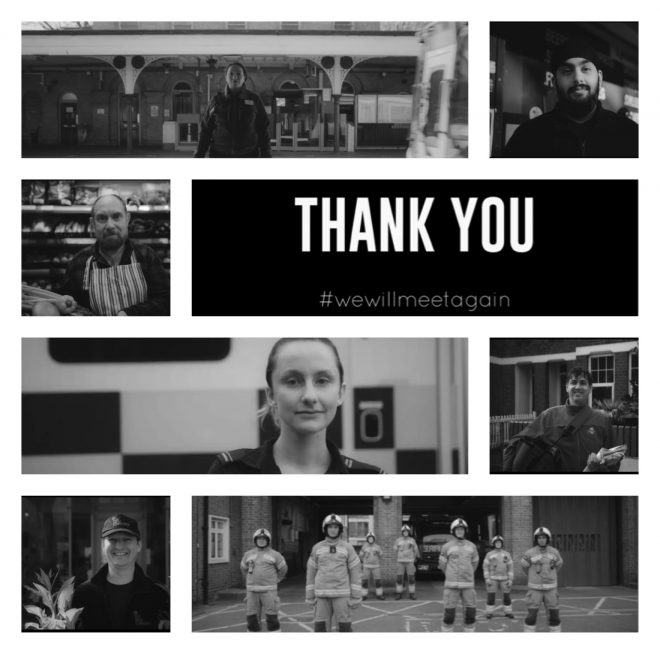 Local filmmakers Marie Lanna and Jaime Feliu-Torres have produced a wonderful short film acknowledging the contribution of our key-workers during the Corona Crisis.  Filmed mostly in Kew, the film features many familiar faces and has been widely shared in the community and beyond.

This short film entitled “We will meet again” is a small gesture of appreciation for all the key and front-line workers who are out there on our streets.

The idea came as a direct reaction to our current circumstances and the thought that there were still a lot of people out there working throughout this crisis.  After nearly four weeks of staying at home, thinking about the situation and feeling impotent in my desire to give something back to our community, I had the realisation that the work of a film maker is that of communicating and that perhaps a film would be the way to connect with our community in a broader sense, as it could reach many people at the same time. Not only that, but also the fact that our community could reflect every other community out there and unite us all through a positive message.

We walked in our neighbourhood to talk to the key-workers and invite them to be portrayed and the result blew us away.  All of the workers we approached were incredibly responsive to the idea of the project.  Spending some time with each one of them, listening to their stories, their current feelings, their points of view, getting to know them a little was very gratifying.

The film tries to share this feeling of positivity and connection between us all.  It portrays the workers of our neighbourhood in their uniforms, standing by their working posts. They look deep into the lens and there are different emotions running through their eyes.  These are the emotions that we all feel. The emotions that connect us as human beings.

It is a moment to turn the viewer’s attention to the other, the one standing in front of us. A little moment to think of all these people, that are helping us right now, beyond their shop doorways, the train platforms or the hospital wards. To think of them in the life we all share together and remember that we have to look after one another.

Above it all, the aim of the film is to spread positivity during such troubled times, voicing what many of us wish to say which is a big THANK YOU.